We may do science for now, but in the end science will do us all in 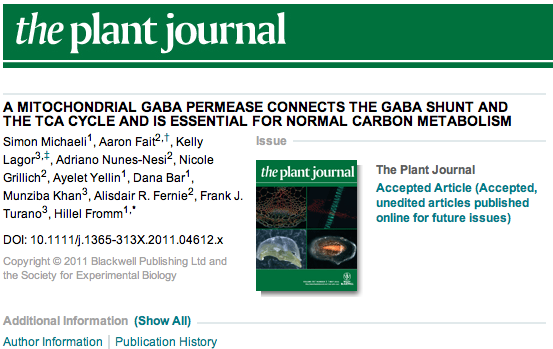 It’s a strange thing, seeing this thing in the world. It’s an extension of the research I did as an undergraduate and I have to say that as the time dragged on (and on and on) I honestly didn’t believe that I would stay so high in the authorship. One of my figures made it into the final paper (and a bit of the data I generated with some plate assays and plant measurements).

For those not familiar, authorship on scientific papers goes something like this:

In this case, this work was done in two labs between two PI’s so they’re double billed at the end (with Dr. Fromm having been the one to do the bulk of the PI’ing on this particular paper and Dr. Turano, who was my boss).

There is now officially a record of my career as a scientist. I’m a bit chuffed about it, I have to say. While I didn’t get a single publication out of my graduate work*, this numbs the sting a bit. After all, this paper represents the only high point of my life as a scientist – when I was still excited about it. And not just excited about the IDEA of becoming A SCIENTIST, but also enthusiastic about the PROCESS of science. I didn’t mind the long days because I loved so deeply. I lived in the lab the entire last year of college. Right up until I left DC for good.

It still makes me sad to think of that me, crying that last day in lab as I gathered everything from my bench into my notebook, sitting in front of the ancient Mac that was possessed by the spirit of John Ritter. Sad then because I was leaving the first place I ever felt really at home. Sad now because I realize that was the last time I was happy as a scientist.

I wanted to change the world.

I wanted to change the fucking world.

It’s funny how small a life becomes as we get older – the things that fall out of focus. I made a comment in jest in an e-mail to a friend earlier today about how time seems to be speeding up as we get older. I said, “I’m convinced it has to do with the weight of a lifetime of memories causing a warp in spacetime around me.”

The weight of memories can compress a thing. It can compress all of a life into these moments where we can see ourselves now and ourselves then and twist it all around until we’re so wrung out from the friction between the two that we can become broken.

But there’s always a light. Even black holes – the densest of things, let a little light shine through from time to time.

*That’s not to say I didn’t WRITE a paper. Or two. Just that they haven’t been published. Yet.

This entry was posted in Process Geekery. Bookmark the permalink.