A Fall Ritual: The Exorcist 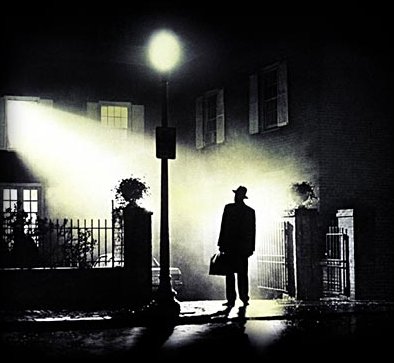 It’s fall, which is my favorite time of year to go through my ritualistic viewing of favorite horror movies.

Up first: The Exorcist

I loved this movie from the first time I saw it as a kid. I’m not sure what it was at the time (I was very young), but I know I was first dipping into horror in earnest (Clive Barker, HP Lovecraft, Poe) and I was in complete wonder and awe at the BEAUTY the phantasmagorical was capable of.

I will admit, the first time I watched it, I didn’t understand it. And though in the years since – and I’ve read the book (which does provide more explanation than the movie) and the sequel and watched the movie dozens of times – I can that understanding is unnecessary. The whole point of the movie is that there is this MASSIVE thing no one CAN understand. The characters’ anger and the frustration at not knowing what’s going on is YOUR anger and frustration. But it’s forgotten in those moments of pure horror (spiderwalking, “Fuck Me,” flashes of demonic faces, pea soup, etc.), and you’re left feeling small and lost in the face of this thing that no one can seem to explain.

It’s a movie about doubt and uncertainty.

Even when they come up with what we as the audience know is actually happening, the demon inside Reagan does a brilliant job spinning further doubt and uncertainty. But in the face of that uncertainty, we can still find our feet.

It’s a movie about how true evil is beyond understanding because the uncertainty of never being able to pin it down, to define it. It means we can’t fight it. We can’t anticipate it. And therefore we can never destroy it.

And that, to me, is beautiful.

I’m a scientist at heart. I believe that everything in our natural world can be explained, though we lack some of the tools at present to fully do so. But when I can dip into a story where there are things that aren’t meant to be explained or understood, I can recapture some of that awe and wonder horror inspired in me as a kid. It’s comforting.

I’ll tell you a story. In 2000, I started college in Washington D.C. That was the same year as the 25th anniversary theatrical re-release of The Exorcist. It was playing in the Uptown Theater, which was a legitimate old-time theater with a balcony and just one screen, so my friends and I made the trek up there to see it. We sat in the balcony.

I have walked through Georgetown in the fall. I have climbed the Exorcist steps. I’ve stood in front of the Cathedral on the Georgetown campus. This movie has been part of every stage of my life, through each of my own periods of uncertainty.

But one thing’s for certain: I look forward to next year, when I can curl up under the blankets on the couch with a hot cup of coffee and watch it all over again.

This entry was posted in Ritual Movies. Bookmark the permalink.