And now for you, I have nothing left

I said a thing today that I’ve been thinking about ever since it fell out of my mouth:

“I’m only afraid when things can be taken from me.” 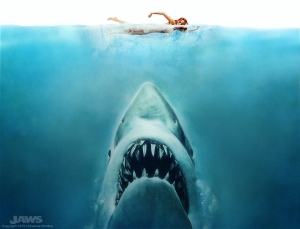 This is meant to symbolize the feeling of FUCK THAT SHIT

I’m afraid of lots of stuff: failure, the ocean, space, (to name a few). They’re valid things to fear and they can all take things from you. A fear of failure robs you of hope. The ocean* is full of blind and bloodthirsty terrors that would happily rob you of chunks of yourself. Space is full of so much nothing, it’ll make you pull yourself apart until you’re nothing too.

A decade ago I was pretty much afraid of everything, but I was particularly afraid of what was going to happen to me/what I was going to do to myself. Then I had an epiphany one afternoon while I was sitting in the loading dock behind the lab building smoking a cigarette:

Everything in my life that was bothering me had two aspects to it: things I had control over and things I didn’t.

The stuff I had control over I was already working on, and there was nothing I could do about the stuff I couldn’t control. So I let all the worry and anxiety about the latter shit go. I began to feel better for the first time in years.

What’s most fucked up, looking back on it now, is that I used to be afraid of everything I wanted to become. Every step I took towards becoming who I am today was fucking terrifying to take.

I don’t have to go to space, or into the ocean. I am getting better at being less afraid of people as well as failure. My emotional reaction to these things IS something I have control over – I can look at what I’m feeling, understand why I’m feeling that way, separate the stuff I can control from the stuff I can’t, then go on my happy way, giggling arm-in-arm with my defense mechanisms and coping strategies.

So yeah. When I said that thing, I thought, “That’s about right.” Space and the ocean and failure weren’t taking anything I wasn’t already giving them because their threats were (mostly) imaginary.

But I’m also getting to the point in my life where I can see how thin the connective tissue is. How easily everything can fall completely apart. How control is just a bedtime story I’m telling myself so I can sleep at night.**

This is what makes that thing I said is a lie. I’m not only afraid when things can be taken from me.

I’m afraid all the fucking time.***

* Ask me sometime why I’ll never go surfing ever again, and it’s not just because I have a distaste for sand and direct sunlight.

** I’m okay, really. Just thinking about a lot of stuff lately. I could maybe use one of those blue canaries. Maybe for that outlet by the light switch.

*** I promise my next post will be about something not me-related. You’ll get either an essay on cognitive neuroscience or Interstellar. Maybe both.