Remember How We Used to Feel These Days Would Never End

Friday night the transformer connected to my apartment complex exploded. Not just through half-hearted puffs of smoke, but in a literal ball of flames. I was standing outside in my pajamas, watching the doomed transformer with my neighbors when it happened.

I had been planning on spending the night on my couch with some comfort movies when the power went out. I had already made plans, then broke them in favor of being alone, where I wouldn’t have to think, or speak, or do anything really, other than try to forget about all of the reasons why the day had turned out rotten, and all of the reasons why I thought that being alone would be the answer. And then I watched as those plans exploded. In a ball of flames.

So I rekindled my plans and went out with for dinner and drinks with Derek, then went to go see a late showing of ParaNorman (which was awesome, btw). I got back to my still-dark apartment complex after midnight to find my neighbors still out in the courtyard.

I’ve lived in cities all my life and never before have I lived in a complex where everyone knew everyone else, considered each other friends. Where when the power goes out (as it has before), they’re all content to hang around in the courtyard sharing cigarettes, warm beer, melting ice cream, and conversation. I stayed up chatting with them for another hour as the hazmat team finished their clean up, then crawled into bed in a vastly improved mood.

Sometimes I forget that what we want isn’t always what we need.

That’s a good summary of the summer, where I pushed past my ever-present preference to be alone with my thoughts in a dark, empty room, and chose to connect instead.

Here’s a run down, with highlights:

This summer was filled with so many firsts, so many new friends, so many thrumming nerves, so much laughter and joy. I’m so lucky to have these people in my life. My feelings of gratitude are overwhelming at times since I still can’t understand what I did to deserve all of this.

It makes me want to tell the me of five years ago — the girl who was so desperate for hope, who felt so alone even in the company of others, who wanted to do nothing more than run away from everything, who was so scared to go after what she wanted, who would have spent Friday night alone, moping by candlelight and sleeping as a way to make everything stop hurting for a little while — that everything turns out okay in the end. That there are people that care about her even when she doesn’t want to believe it. When I still don’t want to believe it. If I could have told her that, maybe then on a day like today, where I’m walking a thin emotional line, it would be easier to remember.

We’re all haunted by the people we once were, for better or worse. But it doesn’t mean we can’t change. Or that we haven’t changed. Sometimes it takes a transformer exploding to put that into perspective.

All my love to my friends, new and old alike. 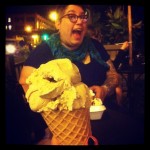 This entry was posted in Conventioneering, Errata. Bookmark the permalink.